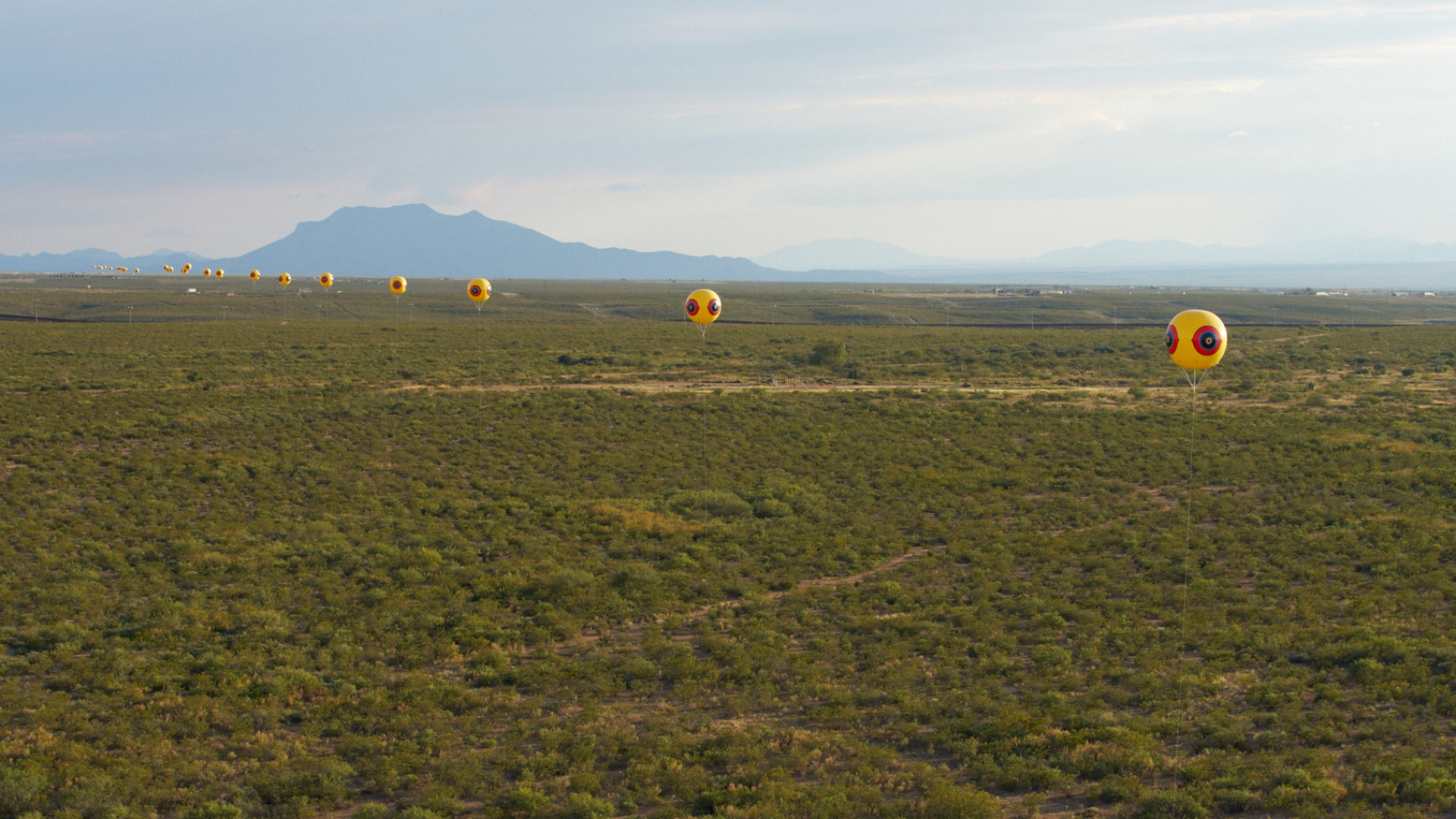 by Karina Taylor
For four days in October this year, the Mexican-American border featured a curious kind of boundary: a two-mile line of yellow, helium-filled balloons, painted with unblinking eyes, floating 50 feet above the ground. World Policy Journal corresponded with the designers of this “Repellent Fence,” the art collective Postcommodity, on the project’s immediate effect, and on challenging preconceived notions of surveillance, boundaries, and the indigenous past.
WORLD POLICY JOURNAL: People who viewed this installation (and similar projects undertaken by Postcommodity) were confronted with an unblinking eye staring back at them. What reactions did you hope to bring to the surface when that interaction took place? Fear? Introspection? A sense that someone is watching?
POSTCOMMODITY: We were inspired by the unblinking eye of the cameras, border patrol binoculars, and aerial aircrafts that monitor and surveil those lands. We wanted to remind those who visited the installation from faraway lands of this fact of life for people of the region. For the local people, we wanted to acknowledge that we understood this constant invasion into their lives. For the militarized agencies for this surveillance, we wanted to turn the intruding reflection back upon them, fear and introspection staring at themselves in the mirror.
The eye was also interpreted by residents of both communities as representing the ‘awakening of their indigeneity.’
WPJ: Tell me more about the conceptualization of the title.
PC: With a title like Repellent Fence, things start to very quickly get really complicated and noisy. Repellent Fence is a fence comprised of balloons with eyes bearing the mark of an indigenous open eye and a consumer scare eye. For us, [it] was another creative mechanism to help generate the complexity we’re seeking. Postcommodity’s work is guided by principles of indigenous storytelling. We position metaphors that communicate narratives of indigenous self-determination with the broader public. Our intention was that our fence would differ from the border wall in every way possible: in form, in duration, in materials, in direction, and in purpose.
Perhaps the title of Repellent Fence confuses those who desperately cling to the idea of nationalism and the need for an iron wall. They got a Repellent Fence and didn’t know how to react, and couldn’t understand the logic of such a fence constructed by brown populations of people. Perhaps the Repellent Fence demonstrates the ways by which the iron wall repels logic and our humanity.
WPJ: What [else] was this temporary fence meant to repel?
PC: As a fence comprised of spiritual mediators (the balloons), perhaps the Repellent Fence is warding off militarization, surveillance, and the iron wall away from the sacred ancestral homelands of indigenous peoples. Perhaps it is repellent things like border patrol or anti-immigration vigilante groups. At the same time, as an amplified consumer bird repellent product, these balloons represent a critical monument to the consumption of products designed with embedded obsolescence, which create disparities that are destabilizing indigenous populations, and help repel people away from their home communities.

WPJ: Having no prior knowledge of the project, upon learning the details my first (unconscious) reaction was to smile. Was it your intention to change the tenor of conversation surrounding the U.S.-Mexican border?
PC: Yes, it was our intention to transform the tenor of the conversation… to move the U.S.-Mexico immigration discourse away from the oversimplified, polarizing, partisan rhetoric championed by politics and mass media. We used the social engagement aspects of Repellent Fence and the land art sculpture itself to demonstrate the complexity of trans-border systems, and to foster productive, respectful, and nuanced public dialogues that confront the realities of the iron wall, which demarcates the most highly contested and militarized places in the Western Hemisphere.
The benefit of these dialogues led the cities of Douglas, Arizona, and Agua Prieta, Sonora (a singular community divided by a border wall), to exercise their local self-determination by identifying and supporting their trans-border community interests, desires, concerns, and goals for creating a more safe, healthy, and culturally appropriate borderlands environment for its citizens. Although Repellent Fence was installed for four days of indigenous re-imagined ceremony, what resulted from this indigenous re-imagined ceremony was local bi-national developments based upon new trans-border relationships that were both forged and operationalized during the imagining, construction, and celebration of Repellent Fence.
During the early phases of these dialogues we were informed by community stakeholders that Repellent Fence is a monument that bi-directionally reaches across the U.S./Mexico border as a suture that stitches the peoples of the Americas together. To Postcommodity, the installation of Repellent Fence symbolically demonstrated the interconnectedness of the Western Hemisphere in such a way that recognized the land, indigenous peoples, history, relationships, movement, and communication. Repellent Fence is a symbol that captured our imaginations and reawakened a memory of indigeneity that will be remembered in the Sonoran desert for years to come.
WPJ: Can you elaborate on how involved it became to pull this project off? More specifically, were you surprised by who emerged from the community to collaborate?
PC: It evolved through diplomacy, public affairs, community organizing, the self-determination of one community divided by the Mexico/U.S. borde—and a healthy dose of patience and persistence. The community, as a whole, emerged to pull this off. Rather than being surprised about who emerged to help, we were more surprised by the parties who did not emerge to attempt to stop it from happening—no radicals, no militiamen, no white supremacists. They edited themselves out of the work because I think they saw something generative and positive that was much bigger than them and their hatred.

WPJ: The HyperAllergic piece had a great observation that “every issue in the entire hemisphere is magnified and intensified in the borderlands.” Is there another place that would benefit from an installation of this kind?
PC: That’s a question that many people have asked us. I think there is always a role that art can play [in] facilitating dialogue within contested spaces in a thoughtful and respectful manner. There are more contested spaces, globally, than ever before. Millions upon millions of people are displaced by warfare, political instability, resource extraction, catastrophic weather, and numerous appendages of globalism and neoliberalism. So, perhaps the role of art as a facilitator of dialogue and shared human experience is more important now than ever before.
Repellent Fence is an incredibly unique [event]. It was eight years in the making. And it was conceived upon a deep and multifaceted understanding of the land, communities, peoples, and cultures […] of the borderlands, [in a] collaboration [that] was multigenerational, multiracial, multicultural, and multinational. The work was focused on one specific community, divided by an international border [but still] exercising its [collective] self-determination […] against the dominant political wills of two sovereign nations. [Repellent Fence] was about [creating and] positioning a metaphor with the capacity to inspire and mobilize people to […] re-engage [with] the land and community. In a broader context [Repellent Fence] inspires people on both sides of the border to publicly acknowledge their indigeneity, and the indigeneity of the peoples migrating across the border, and to [contextualize] the border within the history of our hemisphere. We are all interconnected as indigenous people of this hemisphere, and we have always been.