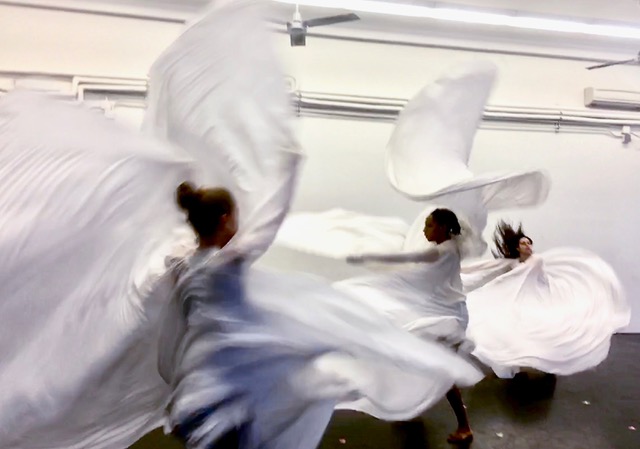 Jody Sperling’s vibrant career as a dancer, choreographer, teacher, and founder of Time Lapse Dance has taken her to a place some only dream of. In spring 2014 she became the first-ever choreographer-in-residence to join a polar science mission aboard the U.S Coast Guard Cutter Healy. For 43 days she journeyed through the Chukchi Sea where she danced solo on icecaps, documenting the performances on film. Sperling’s new production, Wind Rose, was inspired by her “amazing experience in the Arctic dancing on vast expanses of (disappearing) ice.”

Wind Rose is a work in progress, which I was fortunate to observe during a recent working rehearsal held in a sun-filled studio in the flatiron district of New York City. As I entered the studio I was immediately struck by the five dancers clad from head to toe in voluminous sheaths of diaphanous white cloth that became airborne at the slightest suggestion of movement. The effect was ethereal and dramatic; the choice of white, the absence of color, draws attention to form, a foundation of the dance.

Sperling considers Wind Rose to be a sequel to her dance Ice Cycle, first performed in 2015. Ice Cycle grew out of her experience in the Arctic and desire to express the “the dynamism and fragility of sea ice.” But this time, as a native New Yorker, she wanted to connect her experience to her hometown, seeking to address the question: How can people living far from the Arctic understand the interconnected effects of climate change? Citing the popular ubiquitous phrase “what happens in the Arctic doesn’t stay in the Arctic,” Sperling pointed out to me that a weakening of the polar vortex over the past four decades is having consequences for people living far outside of the Arctic. This vortex is usually trapped in high winds circulating around the Arctic, and its weakening explains some of the extreme chills and unseasonably cold weather experienced in Europe and as far south as Florida in the U.S. So in the process of creating Wind Rose, Sperling integrated this knowledge and based her dance on the wind rose, a meteorological graphing tool that records the speed and direction of wind.

The dance is an artistic simulation of the meteorological tool, a highly spirited dance that engages the viewer’s senses of sight, hearing, and touch to draw you deeply into the moment. Indeed, the extent of its power can be hypnotic at moments as you feel the breeze of the dancers as they weave in and out of one another, some dancers moving downstage while others float upstage. The effect is graceful and wild, yet controlled at the same time.

As early as the 13th century, the wind rose was also used to guide mariners through the open seas by showing the direction of the eight principal winds. This theme is apparent in the dance. The fugue composed of eight movements—the Houdini, Thwap, Windmill, Turn, Houdini Turning, Throw, Breath, and Ruff-Disc—is arranged and rearranged throughout the performance, resulting in a mesmerizing experience. At times the dancers remind me of whirling dervishes; in its pure form Sufi whirling is practiced by followers of the 13th century Islamic scholar and poet Rumi, among others, as a form of active meditation while focusing on God. What seems like a series of simple movements is in fact a highly complex arrangement. The intricacy of the dance is evident during the working rehearsal, where the smallest movements might require countless minute adjustments to get right.

Wind Rose emulates the wild intensity of extreme weather to insist that you experience the reality of climate change in the here and now.

Wind Rose will be performed in New York from May 16th to May 19th. Visit the show’s website to see a preview of the performance and find information about times and locations. Wind Rose may still be a work in progress, but if the working rehearsal is any indication, then the performance is sure to be exhilarating.

Erica M. Dingman is a senior fellow at the World Policy Institute and director of Arctic in Context.