Cat and Mouse in Cyberspace 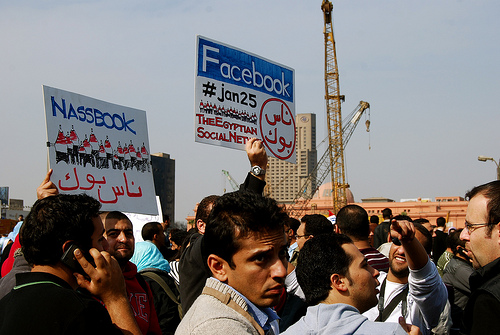 By Idil Abshir and Hala Droubi

The upheavals that have rocked the Middle East this year have demonstrated, among other things, that political change and the Internet have become inseparable spheres of activity, and that everyone—governments, protestors, and onlookers—has had to rethink the role of Internet in the region.

With one revolution after another, the repressive or controlling governments of the Middle East have been faced with major challenges. In many cases, they have found that the Internet, arguably one of the key factors behind the success of these revolutions, is beyond their control.

The game between governments and netizens is on. The rules are not set and the tactics are far from clear. Each protagonist is playing to win, observing neighbors across borders as they play the same game, watching them fall, and learning from their mistakes.

Who controls the Internet? To judge from the courses of events in recent months, no one individual or institution can completely make that claim.

Before the uprisings, a game of cat and mouse.

“Governments are obsessed with control,” said 26 year-old Ahmed Al-Omran, one of the most prominent bloggers in Saudi Arabia and a student at Columbia University. Al-Omran says that Middle Eastern governments, including Saudi Arabia, had a variety of methods to control the Internet.

He said that “censorship, laws, intimidation or persecution,” are all examples of how governments are trying to hinder online activism. Internet users on the other hand are keen on finding creative ways to get around these restrictions. “It’s a constant cat and mouse game,” he said.

“The younger generation is much more tech-savvy than the government, and they know how to use these technologies and to get around these censorships,” said Al-Omran. “Governments will try to use different tactics to try to win this game.”

Like many of its neighboring countries, the Tunisian government has always tried to control the Internet and online activities. Many bloggers and online reporters were attacked in Tunisia, including blogger, Zouhair Yahyaoui. According to a report by the Committee to Protect Journalists, he was arrested in June2002 for "propagation of false news.” He was freed in November 2003.

In response to widespread protests in December 2010, the Tunisian government decided to tighten its control of the Internet and tried to stifle the flow of information and reports about Tunisia. It shied away from shutting down the Internet entirely, but used other covert methods of control.  According to a CPJ report, the government stole passwords to delete e-mail accounts and Facebook groups and detained bloggers without charges or trial.

At one point, the regime offered reforms, including ceasing online censorship, in order to placate the protestors. This measure fell short, and failing to crush the escalating anger and unrest in the country, the regime collapsed.

The Tunisian revolution quickly spilled over into Egypt. Egyptian opposition organizers used social networks and other online tools to mobilize people, organize protests and upload reports about what was happening in Egypt. Shortly after Egypt’s Day of Rage on January 25, the government tried to maintain control by shutting down the Internet.

The shutdown lasted from January 28 to February 2. The protesters used workarounds to create alternatives to the closed off Internet servers.  There were proxy servers and special phone numbers that people could call to convert voicemails to tweets. It was a real time demonstration of technical adaptability and the speed at which people were able to react the government’s efforts to silence them.

After less than a week, the regime reversed the decision and restored partial access.

“Egypt’s blackout failed miserably,” Abdel Dayem said. “In fact, it brought people out on the streets who may have stayed home.” He said that by showing cooking shows all day, Egyptian state TV insulted people’s intelligence and created a completely false official narrative. As a result, people took it upon themselves not only to find out what was going on, but also to be a part of it.

The internet blackout was comprehensive, but proved to be counterproductive, according to an article in the San Francisco Chronicle. The hasty decision, the article said, did not take into account the long-term economic ramifications. By going completely offline, the Egyptian government hurt the perception of Egypt as an Internet hub in the region.

“This idea that ‘we’re just going to institute a media blackout’ illustrates the mindset these regimes have,” Abdel Dayem said. “They have failed to abandon it, and it is costing them dearly.”

In Syria, the government made the first move before the unrest reached its borders. Rather than imposing further restrictions, it lifted the long-standing ban on Facebook, YouTube and other Internet media.

The government explanation was that it felt strong and confident, and believed that the Internet and social networks were a powerful tool that the government could use to its advantage. However, a few days after the ban was lifted, Facebook was used to organize a pro-government rally. The tactic appeared to be successful at first, but in the months that followed, the tables were turned on Internet freedom.

The conciliatory move did not stop social unrest from reaching Syria, and the newly available social media outlets, especially Facebook and YouTube, were used to mobilize people and compensate for the lack of media coverage.

Abdel Dayem says the authoritarian and repressive attitudes these regimes have towards the Internet, have been just as harmful to them as the dissent they have tried to silence.

“These governments’ decisions hastened their downfall.”

Idil Abshir is a freelance multimedia journalist based in New York City. She recently graduated with a Masters in Digital Media from the Columbia Graduate School of Journalism.
Hala Droubi, from Syria, has a Masters from the Columbia Graduate School of Journalism. She worked in advertising and public relations in Syria, Lebanon and Saudi Arabia, and has written for leadin publications in the Middle East.
Photo courtesy of Flickr user rouelshimi.