In Print: “Between the Devil and the Deep Blue Sea” 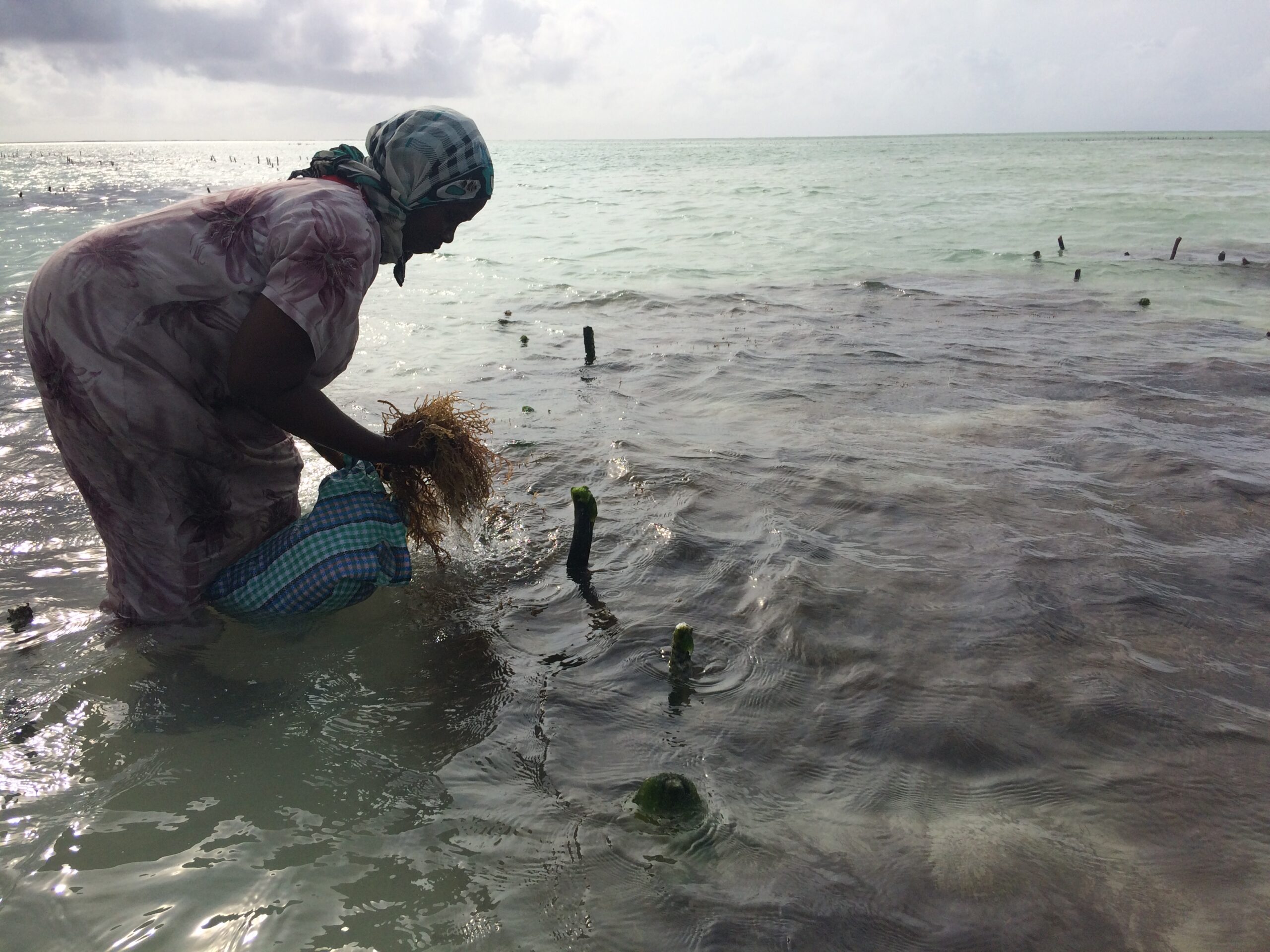 On an early August morning in the village of Paje on the eastern shore of Zanzibar, an island 15 miles off the coast of Tanzania, women gathered on the beach, carrying sticks, plastic bags, and black leather purses. As tourists did sun salutations on the soft sand, the women waded into the ocean, their skirts floating like lilies on the water. In front of them, rows of red and green bundles dotted the ocean, evoking winning lines in a game of Connect Four. The seaweed seedlings stretched as far as the eye could see. These women were there to harvest them.

Mwanaisha Makame, a seaweed farmer, stood knee-deep in the water, tending to her crop. The seaweed grows on thin raffia strings (tie-tie, in the local Kiswahili), attached to nylon ropes suspended between stakes, which are pegged to the ocean floor. Seaweed prefers white, clean sand, away from coral heads or other formations that attract algae-grazing fish. Like plants, seaweed relies on photosynthesis to grow, and can thrive in waters up to 16 feet deep. Unlike plants, the cellular structure of seaweed is flexible, and even while firmly attached to the strings, it will yield to the rhythms of the waves and tides.

The tides set the agenda of Makame’s day. Starting at 4 a.m., a few hours before sunrise, she prays, cooks, and cleans. Then, for the two weeks a month when tides are low—during the new moon and full moon—she works on the beach, harvesting seaweed, repairing ropes that broke during storms, and removing stones, seagrass, and silt from her crop. Work continues until about 4 p.m., when the ocean comes rushing in, and Makame, who does not know how to swim, returns home. For six weeks, the length of each growth cycle, seaweed gathers on the strings, amassing weight and nutrients before it is harvested.

As lunar cycles structure seaweed growth cycles, so has seaweed shaped the stages of Makame’s life: Profits from farming helped her gain financial independence and sent her 22-year-old daughter to college. In Zanzibar’s conservative Islamic society, married women are traditionally confined to their homes, and to domestic labor. Seaweed farming, and the additional income it brings in—up to 1,125,745 shillings (around $500) per year, compared to an average annual income of 1,263,100 shillings ($561)—have disrupted traditional gender roles. At the beach, women can work freely, earning money they spend at their discretion. “The fast money that I got from seaweed planting I used to build my own house,” Makame said. Before her daughter went to college, they would work together on the farm.

In this coastal village, life is cyclical. Steady demand for seaweed has kept more women in control of their incomes. But recent changes brought on by global warming have disrupted these routines.

Lisa De Bode is a journalist based in Brooklyn. A former staff reporter at Al Jazeera America in New York, and a field producer at CNN in Brussels, she’s the author of EUROPA, An Illustrated Guide to Europe for Migrants and Refugees, and a 2017 Reporting Fellow at the International Women’s Media Foundation.