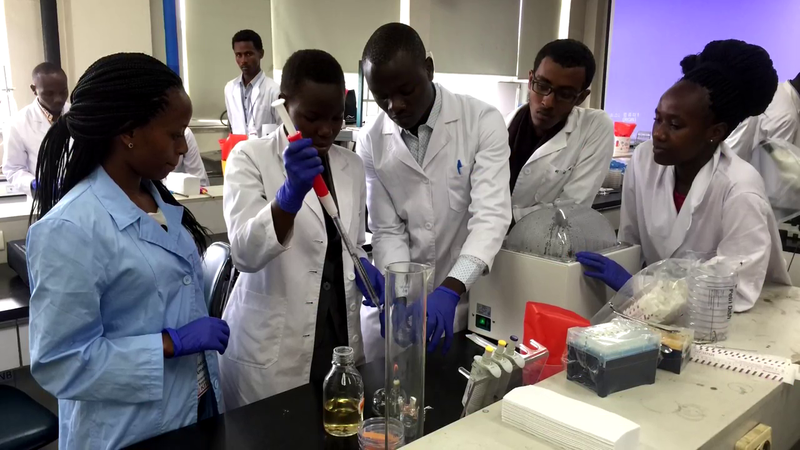 It was around 3 p.m. on Jan. 18, 2017, when I received the dreaded phone call. My sister-in-law’s voice on the other end of the line was unusually shaky. “Dad just fainted,” she said. “The doctors say we need to get him to an intensive care unit.”

My father had worked hard all his life and had generally stayed in good health. Indeed, we had spoken a few days earlier and he hadn’t mentioned any aches or pains. This message made no sense to me. But there was no time to think about it—we needed to get him to a hospital. Hours later, we learned that he had suffered a haemorrhagic stroke, and 10 days later, he succumbed.

Since my childhood, the African continent has undergone major demographic, social, and economic changes, which in turn have led to significant lifestyle shifts. Growing up we did incidental exercise by walking to school, fetching water and firewood, and playing ‘katty’ or monkey-in-the-middle. In contrast, many more Africans today spend their time sitting behind a desk or a steering wheel. Dietary habits have also changed, with organically grown bananas replaced by sugary pastries. All of these trends are the perfect backdrop for a non-communicable disease outbreak.

Africa must quickly ramp up research into these types of medical problems or risk seeing decades of hard-won health gains undermined by cancer, diabetes, and cardiovascular disease. While the continent faces some of the world’s fastest-rising rates of non-communicable diseases—they will represent 46 percent of deaths by 2030—few studies are currently being done on how these diseases affect populations in Africa.

I acknowledge that communicable diseases still require significant time and resources—especially HIV, malaria, and tuberculosis, known as “the big three.” However, except for drug-resistant strains, all three can be fairly well managed. Indeed, in the HIV field, the increased availability of effective drugs has resulted in reduced transmissions, prolonged lives, and overall improved health-care systems. The progress can in part be attributed to the level of attention directed at the epidemic—particularly, the funding. Recent data have shown that although HIV currently accounts for approximately 4 percent of the global disease burden, it attracts 29 percent of global health funds. In contrast, non-communicable diseases account for 50 percent of the global disease burden, but receive only 2 percent of the funds.

What will it take to shift global health efforts toward the quiet killers? As attention and investment turn to this new set of medical challenges, there are are a few things African heads of state, health officials, and policymakers should consider.

Treating and caring for those with non-commmunicable diseases requires extensive infrastructure. The chronic nature of the diseases can be emotionally and financially draining, more so than for the “big three.” Across the continent, our current health-care systems—though ‘improved,’ a silver lining of the HIV crisis—remain ill-prepared to address cancer, stroke, and heart disease. There is insufficient equipment available—and that which exists is often poorly maintained—and too few non-communicable disease specialists. Consequently, effective prevention strategies are necessary to reduce the need for treatment.

Fortunately, global attention is increasingly focused on prevention and control. Many of these diseases have common risk factors, such as physical inactivity, an unhealthy diet, and tobacco and alcohol consumption—which means that a conscious change in common habits can help reduce potential risk. Managing non-communicable diseases is also a target in the United Nations’ sustainable development goals, after being ignored in the millennium development goals, which ended in 2015. Regrettably, progress on the continent is lagging in key areas such as disease management, drug therapy, and counseling.

Africa also needs to invest in basic science research to investigate how non-communicable diseases are specifically affecting our populations. African populations have higher numbers of “variant sites,” meaning that we are incredibly diverse, genetically speaking, and shouldn’t import a one-size-fit-all approach from the West. In fact, doing so could be dangerous. For example, a variant that is found in 30 percent of the Ethiopian population influences the metabolism of codeine. People with this variant rapidly convert codeine into morphine, resulting in toxicity and risk of depression and death. With limited capability to genotype everyone and identify those who should not be given codeine, the Ethiopian government responded to this revelation by putting a ban on the drug in 2015.

Examples like this highlight the need for African governments to invest in systematic genetic characterization of their people to better inform clinical practice and policy. Genetic mapping has made real impact on the treatment of non-communicable diseases already. For instance, the metabolism of warfarin, a drug thinner used to prevent blood clots to reduce the risk of stroke and heart disease, is influenced by genetic variation. After studying African-specific variant sites, scientists adjusted pharmacogenomic algorithms and dosing recommendations to better treat African patients. There are very few non-communicable disease specialists on the continent—and the ones who exist are busy providing care to late-stage patients and have no time for research. Thus, any research investments should have a well-defined component of training and retaining young scientists on the continent.

We need a larger collective effort by African heads of state, government health officials, and religious leaders to spearhead prevention efforts against non-communicable diseases and to support research to explore Africa-specific risk factors. In addition, Africans of all ages should educate themselves on healthy lifestyles, detection of warning signs, and early medical interventions. After my father’s unexpected stroke, I believe even more strongly that each one of us has a responsibility to stop the rise of non-communicable diseases in Africa.

Jenniffer Mabuka (@jennmabuka) is a research scientist and program manager for H3Africa at the African Academy of Sciences in Nairobi. Her portfolio includes the management and implementation of four newly funded projects covering both infectious and non-infectious diseases across the continent. She is a 2018 Aspen New Voices Fellow.