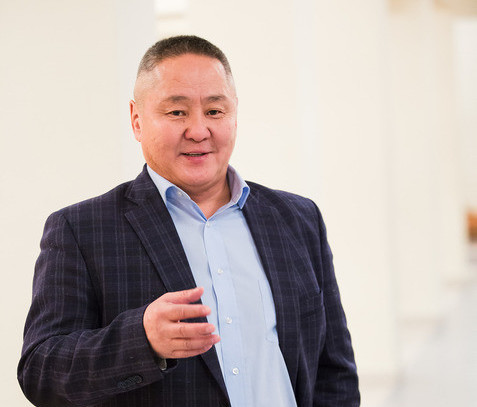 “People of the North” is a series of interviews created in partnership with Arctic in Context and Kesserwan Arteau, a legal and consulting firm that works with indigenous communities. Every other month, Kesserwan Arteau founders Jean François Arteau and Karina Kesserwan publish an interview with leaders, innovators, and community members in an effort to highlight the Arctic’s diversity from the perspectives of those who live there.

We met Anatoly Sleptsov in Moscow in April at a workshop on industrial development in the Arctic, hosted by the Arctic-FROST Project and featuring representatives from six countries.

Sleptsov is head of the department for Arctic and Asian-Pacific law at the North-Eastern Federal University in Yakutsk, the capital city of the Sakha (Yakutia) Republic, located along the Lena River in eastern Siberia. As the Soviet Union dissolved and a new government for the Russian Federation emerged in the early 1990s, Sleptsov was actively involved in shaping both national and regional policy. He was the youngest people’s deputy in the Supreme Council of the Yakut Autonomous Soviet Socialist Republic from 1990 to 1993. As an elected official and a lawyer, he participated in the drafting the Constitution of the Republic of Sakha (Yakutia), adopted in 1992, and Russia’s new national Constitution, adopted in 1993. He also took part in drafting federal and regional legislation on legal support for social and economic development in the Far North, and on the protection of the rights of Indigenous peoples of the North, Siberia, and the Far East of the Russian Federation.

In the interview below, we speak with Sleptsov about his career and how his experience in the Arctic has influenced his approach to lawmaking.

Anatoly Sleptsov: I was born in a nomadic family of reindeer breeders on the coast of the Arctic Ocean. The tradition of the nomadic reindeer herding in the Arctic has a close connection with the native languages of the Indigenous peoples in the region. These distinctive cultures and languages are world heritage.

KA: Tell us more about who you are, what you do, and what is important to you.

AS: I am a representative of a reindeer-herding Arctic nation, the Evens, numbering 20,000 people. I have devoted my life to human rights because I have always believed that law, including customary law, is the only mechanism regulating social relations in the Arctic. Legal rights and duties are both important to me.

I was brought up with the customs and traditions of my people, which I still honor. This helps me understand both nature and people, and to make the correct decision in crucial situations. Life in the extreme climatic conditions of the Arctic makes a person independent, responsible, and purposeful.

KA: What path brought you to your current position?

AS: Thanks to their wealth in natural resources, the eastern Arctic territories in the 1980s became Soviet Union’s center for the extraction of tin and gold.

One morning, when I was a child, I went fishing, as usual, and was surprised when I saw that the river became turbid and red, and that there were dead fish on the shore. I decided to find out what was wrong, so I went upstream and soon saw an unfamiliar rumbling structure and tractors. I asked the workers what this was. They explained that this was an industrial device for the extraction of tin, and told me that my community would now live well. I was indignant and demanded that the workers not spoil the nature and the river, but they said that they were acting according to the law. I asked what the law was, and they told me that these were the written rules of behavior, mandatory for execution of a project like this. Who wrote the laws? I asked. They answered: competent lawyers.

They took me to a meeting of the Soviet youth organization, Komsomol, which had brought members from all over the country to build a mining and processing plant for the extraction of tin in the Arctic. There, and I had the opportunity to express my opinion in a democratic setting. I spoke about the tin industry, arguing that according to our customs, people must not spoil nature. To become a lawyer I studied at the All-USSR Correspondence Institute of Law from 1984 to 1989, and in the meantime I started my professional career working in law-enforcement bodies of the Ministry of Internal Affairs and the Prosecutor’s Office of the Russian Federation.

KA: Tell us about your experience in lawmaking.

AS: In 1990, the first democratic elections were held in the Soviet Union, and I was nominated as a candidate for the Congress of People’s Deputies representing Yakutia. I won a seat, and became the youngest deputy from Yakutia at that time.

Since there were few lawyers in the Russian Federation after the dissolution of the Soviet Union, I was instructed to write new laws for a new country. I have a legal specialization—international law—which helped me handle the task at hand. I began to write drafts of the Constitution, the laws of both Russia and Yakutia, on the basis of international law, primarily on U.N. documents.

At the same time, I drafted laws for Yakutia on the social protection of the Arctic population and the rights of Indigenous, small-numbered peoples of the North. The purpose of this legislation was to preserve the original ways of life and traditional nature management.

The last law that I wrote, on ethnological expertise, was adopted by the regional parliament in 2010. According to experts, this is one of the few effective laws in Russia regarding public relations between the authorities, business, and the Indigenous peoples of the Arctic.

KA: How does your heritage influence you?

AS: I became what I became thanks to traditional knowledge and customs. In my concept, traditional knowledge is the system of knowledge and beliefs of my people, the Evens, about the mutual relations of living beings, including birds, animals, and people, and the Arctic environment, transmitted from generation to generation in the daily life of nomads. This invaluable knowledge was transferred to me by my grandfather when I was a child and rode with him on reindeer in the ancestral territories of our family. When I became a lawyer and a researcher, I used this combination of traditional and scientific knowledge in the interests of Indigenous peoples and in the name of the Arctic.

KA: What was the biggest challenge for you?

AS: To say what others do not want to hear and do what I think is right.

In the new Russia in the early 1990s, Prime Minister Yegor Gaidar proclaimed a new state policy: “We do not need the Arctic, it costs too much for the country’s budget.” So the state refused to support the Arctic, abandoning industrial mining and processing plants, as well as the population, to the mercy of fate.

In these conditions, I had the choice between doing business or volunteering to protect people forced to survive in these difficult conditions in the Arctic, and proposing solutions through the development of new Arctic legislation. I chose the latter.

KA: What are the challenges your North is facing?

AS: The main challenges are climate change, industrial development, and a new phenomenon: market relations.

In the Arctic, food prices are five times higher than the national average, and wages are five times lower than in Moscow. The price of a plane ticket from Yakutsk, the capital of Yakutia, to the Arctic regions is 60,000 rubles ($950), and from Yakutsk to Moscow 15,000 rubles ($240). This makes it impossible to bring fish and meat from the Arctic regions to sell in the city. Meanwhile, there is nobody to sell it to in the Arctic—there is no population able to buy.

The only way to earn money is to learn marketing on the spot, and process the products of reindeer breeding and fishing for sale.

KA: What solutions do you see?

AS: Our ancestors survived because they were able to adapt to extreme conditions and climate change. Now we must also adapt to new conditions of life and boost international cooperation among the Arctic countries.

AS: I see the most environmentally friendly place on the planet, where modern technologies and young people rule, and the Indigenous culture has been preserved.

International cooperation between Arctic and non-Arctic states is key to resolving Arctic challenges. I would also like to see greater interaction in science and education, and the development of ecological and ethnographic tourism. This progress can be hindered only by the short-sighted policies of states.

KA: What else would you like the world to know?

AS: Let’s preserve the nature of the Arctic for present and future generations!

This interview has been edited and condensed for clarity, and translated from Russian by Karina Kesserwan.

Jean François Arteau was born in Quebec and has spent over 20 years working with the Inuit, including seven years in the Arctic town of Kuujuaq.

Karina Kesserwan was born in St. Petersburg, Russia. She has been working with Indigenous peoples for the past 10 years.