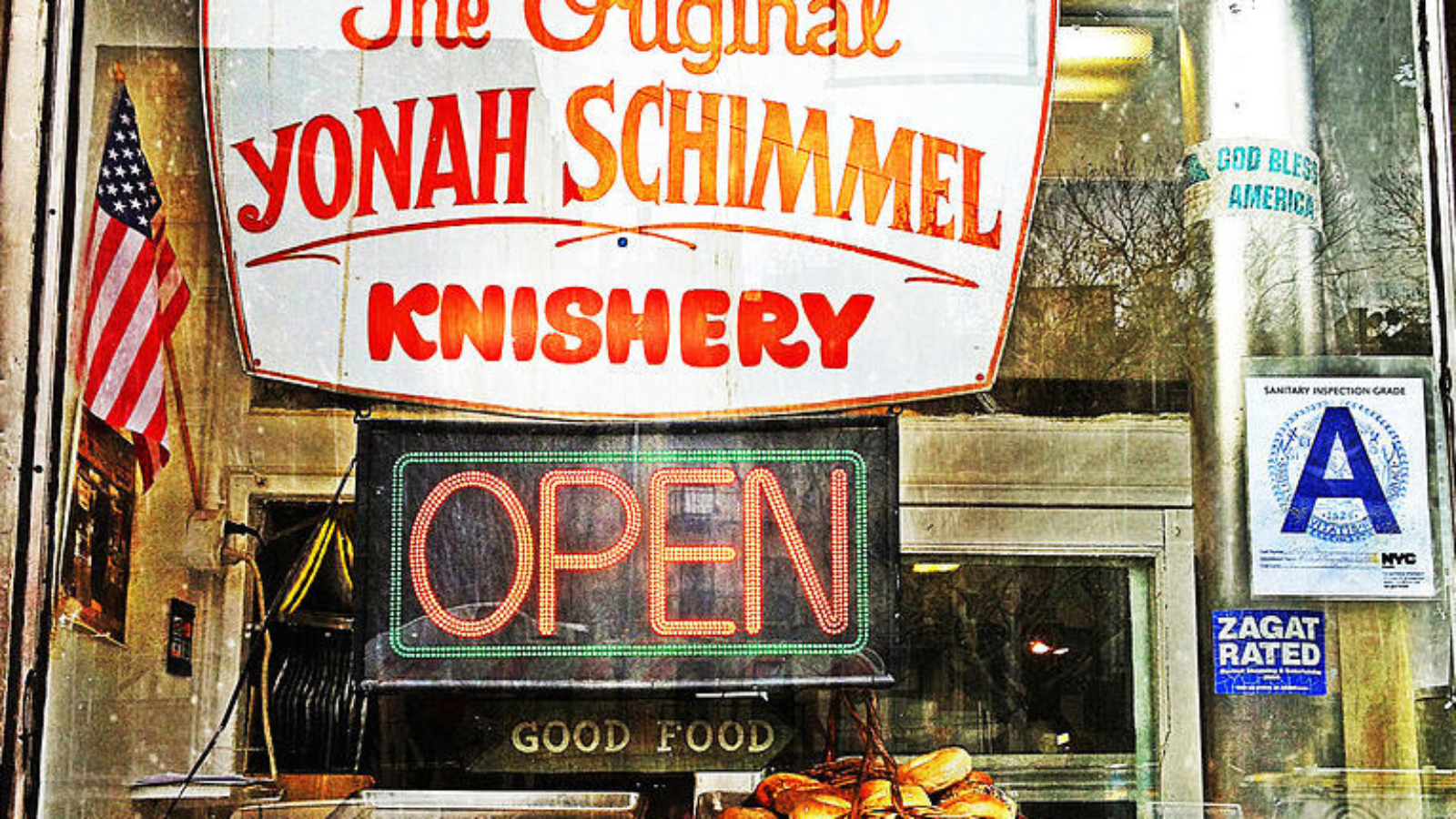 The Pickle Guys is a small store on the corner of Essex and Grand Street. with no tables or chairs. Instead, the interior is dominated by black-mouthed, red-bodied barrels, each full to the brim with its own particular delicacy. The morning I visit, the sunlight beams in through the floor-to-ceiling windows lining two of the four walls, warming the space within, which smells richly of—you guessed it—pickles.

Alan Kaufman, who has been at the Pickle Guys since 1981, is as cheerful and welcoming as his store. Maybe it’s just business—“We’re very friendly here because we value good personal service,” he tells me. But I’m inclined to think it’s something larger. After all, I’m standing in the last pickle store in New York’s Lower East Side. At one point, Kaufman says, there were close to 40 stores on Essex Street. This place holds the memories of the Jewish immigrants for whom this neighborhood is most famous, since their first arrival in the 17th century, when 23 Jewish men, women, and children landed on Manhattan’s shores. Now, gentrification threatens the centuries of history that remain alive today only in the most famous of places—Katz’s Deli, Russ and Daughters, Yonah Schimmel Knish Bakery, and, of course, the Pickle Guys.

In May 1654, the “Jewish Mayflower” arrived in New Amsterdam, which would later be renamed New York. The ship’s passengers were fleeing persecution in Brazil after the country’s re-capture by the Portuguese. Upon arrival, they were forced to auction off their belongings to pay for the journey—they didn’t raise enough money, so some of the adults had to go to debtor’s prison—and were nearly evicted by the governor, Peter Stuyvesant, who did not want Jews in his colony. After an appeal to the Dutch West India Company, the eviction order was revoked, and thus the first Jewish settlers made a home in New York.

The first wave of Jewish immigration into the city, in the early to mid 19th century, was comprised mainly of German Jews. By around 1850, the most affluent of these immigrants were slowly integrating into the middle class, moving uptown and seeking financial fortunes. We owe them a great deal; Bloomingdale’s, Goldman Sachs, and Macy’s Department Store were all founded by German Jewish immigrants during this time.

The second wave, from about 1880 to 1924, was the peak of Jewish immigration from Eastern Europe. As Paul Kaplan, author of Jewish New York: A History and Guide to Neighborhoods, Synagogues, and Eateries, describes it, “the Lower East Side became the most crowded place in the whole world.” But while many poor immigrants were crammed into tenements, starting sweatshops in their apartments and peddling shoes and wares on the street, the area was also a breeding ground for a new set of traditions. “A lot of the immigrants [who] came had to start all over,” Kaplan says. “So there were many cultures mingling on the Lower East Side—so many immigrants trying to create a life for themselves—which means there was a lot of new, amazing culture.”

Yet they faced challenges. While many German Reform Jews were happy to assimilate into American life, Orthodox Jews found it much more difficult to both observe their religion and sustain a living in New York. “A lot of sweatshop employers just said, ‘Too bad, if you don’t come in on Saturday, then don’t bother coming in on Monday,’” Kaplan says. “As a result, many of the immigrants really struggled to keep their religion.”

This conflict also resulted in a schism between the more affluent “uptown” German Jews and the more impoverished “downtown” Eastern European Jews. With increasing social pressure to adapt to the customs of the New World, many immigrants sought ways to retain the traditions they had brought with them from their homeland. This was achieved through the keeping of holidays, the construction of synagogues, and—of course—food.

“You don’t have to be Jewish to eat a knish.” This is one of the signs adorning the walls of Yonah Schimmel Knish Bakery on E. Houston Street, which has been selling knishes—potato, onion, and seasoned filling wrapped in a thin layer of dough and baked round (never square)—since 1890, when Yonah Schimmel himself opened up his first knishery just across the street from the restaurant’s current location.

Now, I sit at one of the tables with owner Ellen Anistratov and eye the newspaper clippings and photographs taped up along the walls, so plentiful that the paint underneath is barely visible. Like the Pickle Guys, the space is small but welcoming, much like a bustling home kitchen during a family holiday. Another sign, “One World, One Taste, One Knish,” beckons from the entrance. I ask Anistratov about its meaning.

“The food here has energy,” she says. “It’s something that carries on from the past to the present to the future. That’s why we have all these different slogans—I think it unites.”

For both Kaufman and Anistratov, the history behind their stores is essential to this sense of unity. While both stores are now successful and famed for their food, each began simply and humbly, in quite similar ways.

“Yonah Schimmel was a scribe [who] came to the United States with his wife. His dream was to teach people spirituality,” Anistratov says. “But since everybody who was here in this area was an immigrant, nobody really had the money to pay. So his wife had to do what she knew best: make knishes.”

Like almost all Jewish eateries in the Lower East Side, both Yonah Schimmel and the Pickle Guys started as pushcarts. “Pre-1920s streets were clogged with peddlers and pushcarts who sold everything from furniture to housewares to chickens,” Kaplan says. “By 1900, there were more than 25,000 pushcarts.”

In fact, Kaufman tells me that the first pickle stores were nothing more than a barrel on the street. “At the end of the day, the owner would just put a top on the barrel, tie a piece of rope around it, and leave,” he says. “The next day he’d come back to the sidewalk, take the rope off, take the top off, and he was open for business.”

By 1938, however, Mayor Fiorello LaGuardia had had enough of pushcarts. In a letter to The New York Times, he wrote that “the open pushcart market is not only antiquated and unnecessary, but also, in many instances, unsanitary. … It is my policy, where a market is necessary, to build a proper covered market so that these same peddlers may be permanently placed in such market kept under proper and wholesome sanitary conditions.”

Kaufman has a different explanation, which he tells me, laughing. “Mayor LaGuardia made people go into stores. That way, they (the city) could collect taxes.”

According to Kaplan, it was a “big dream” for many Jewish immigrants to open stores in America. Joel Russ, the founder of Russ and Daughters, carried Polish mushrooms on his shoulders and sold them on the streets until he could afford his own cart. When he opened his store in 1920, he made his three daughters partners and named it accordingly—not because he was a feminist, but because he had no sons and needed to keep his business afloat.

The notion of family remains important to many Lower East Side eateries today. Anistratov tells me that Yonah Schimmel has been owned by “six generations of the same family,” and that this connection extends also to the guests who have frequented the restaurant for many years.

“There was this one actor who came in … and he said, ‘I am who I am today because of this place,’” Anistratov says. “I asked him what exactly he meant, and he said, ‘I used to come here with my parents every Sunday, … and every time I come to New York, I come back.’”

The Pickle Guys, too, has passed through many hands. Although Kaufman is not descended from the owners of the shop, he felt it necessary to keep the Lower East Side pickle business alive when the famous Guss’ Pickles, just down the street, decided to close its doors in 2002.

“It was either I take it over and continue on, or that would be the end of a dynasty,” Kaufman says. “I did it to keep it alive.”

But what exactly is it that needs to be kept alive? Perhaps it is the stores themselves, and the recipes they have been perfecting over the past hundred years of business. Or perhaps it is something a bit more intangible, yet no less important to the owners.

“I believe in God, and I believe that anything to do with God is infinite,” Anistratov says. “I feel like this place [Yonah Schimmel] has an energy of its own … that’s why we’ve been here for so many years. The Bible doesn’t die; it just carries on. This love, this energy—it’s in knishes.”

“[The Pickle Guys] is a way of keeping tradition alive,” Kaufman adds. “It’s a traditional flavor that brings back memories. People will come in here, and they’ll buy a pickle, and they’ll say, ‘Wow, this tastes just like my grandma used to make it.’”

Between 1925 and 1950, Jewish immigration to the Lower East Side began to dwindle. After changes to U.S. immigration laws and the Great Depression in the 1920s and 30s, there was less economic incentive to migrate to the States. At the same time, housing laws in New York closed down many tenements. By the 1940s, the Jewish population in the city was decreasing for the first time in decades.

In the wake of World War II, however, the New York Jewish community sought to reassert its identity in the face of anti-Semitism and the horrors of the Holocaust. Kaplan writes that their hope was “revitalized” by the convergence of communal and religious activity among third-generation Eastern European Jews. Yet this rekindling of a collective identity was accompanied by a general increase in the social status and affluence of the New York Jewish population in the postwar period, which further contributed to the decline of the Lower East Side community as families moved uptown.

Today, the future of this vibrant neighborhood hangs in the balance. Kaufman tells me that the biggest change in his 38 years in the city has been the gentrification of the area, which, while bringing new customers to the Lower East Side, also threatens these small, historically significant businesses. This gentrification is a result of skyrocketing rent prices since the 1990s and an influx of younger, more educated, and affluent people into the neighborhood. Its effects are best seen in the trendy restaurants and boutiques opening up on Clinton Street and the luxury condominiums and hotels rising above the lower-lying buildings for which the Lower East Side is known.

Nevertheless, both owners believe that, despite the changes, they will carry on the legacies of earlier generations. The Pickle Guys, for example, has a unique Passover tradition, in which a man wearing a gas mask stands outside the restaurant from 9am to 6pm every day and grinds fresh horseradish to be consumed as the “bitter herb” as part of the Passover Seder. Kaufman says that “it’s the only place you’re going to get [horseradish] made the old-fashioned way.”

Anistratov, too, finds that while the position of Yonah Schimmel might be changing with the times, it only becomes more vital to keep the store and its history alive.

“I believe that in this world, it’s what you leave behind that counts,” she says. “Yonah Schimmel left something unbelievable behind. This store represents a piece of New York. It makes me believe that I’m a part of something amazing.”

Veronica Kim is an editorial assistant at World Policy Journal.