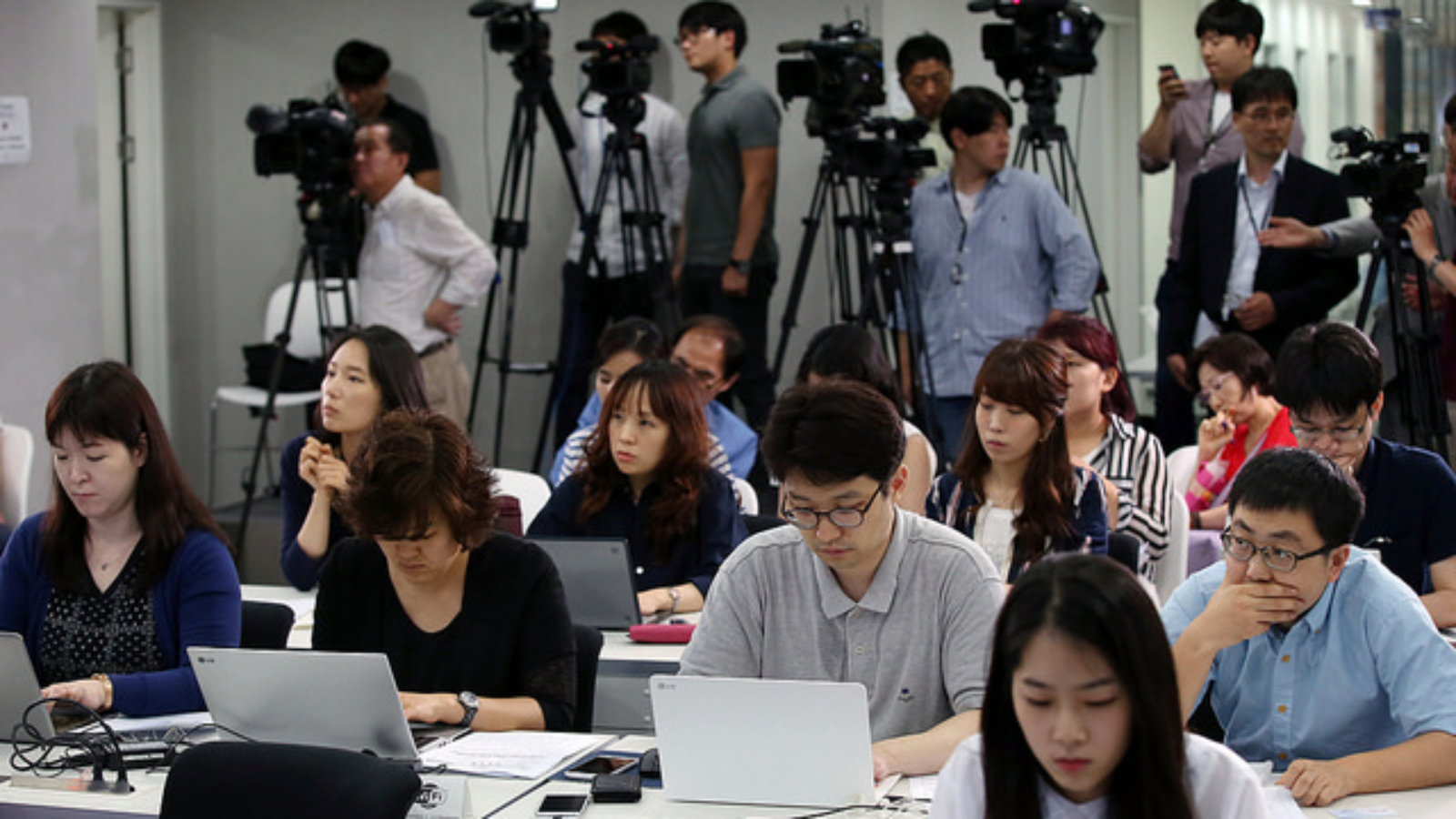 On June 9, 12,000 women gathered in central Seoul in response to the spycam porn epidemic. Spycams, tiny cameras hidden in public bathrooms and other places, had been used to secretly film and disseminate videos of Korean women. The protesters were demanding more intensive police investigations into this phenomenon. The online news site Korea Exposé was one of the first English-language media outlets to report extensively on the protests, South Korea’s largest-ever women’s rights demonstration. Meanwhile, most foreign media outlets were too consumed with the meeting between U.S. President Donald Trump and North Korean leader Kim Jong Un to cover this other groundbreaking moment. Afterward, many of these outlets contacted Korea Exposé to ask for permission to use their material.

“This is what Korea Exposé is about—we focus on niche stories, ones we know are important,” explained Se-Woong Koo, the founder of Korea Exposé.

Influence in Korean media has largely been limited to a few established outlets, such as Chosun Ilbo, Hankyoreh, Dong-a Ilbo, and Joongang Ilbo. Most of them have been around for at least half a century, and their audiences more or less know what to expect from them. But now, with 83 percent of readers citing the internet as their main source of news, new contenders with fresh voices have been emerging online. Korea Exposé and Dotface, a social video platform, are among the outlets that have added new perspectives to Korea’s media landscape.

For both websites, the keyword is representation. Korea Exposé, whose stories are written in English, aims to straddle the division between Korea and the rest of the world. With a team of largely bicultural journalists—Koreans who have lived or been educated abroad—it captures the nuances and contexts that foreign journalists often miss, while allowing, due to the language used, greater access in the international sphere.

“The way that [Korean] stories are told in foreign media can be orientalist or paternalistic,” explained Koo. “Media representation of Korea largely focuses on North Korea, Samsung, technology, and what I call ‘weird Asian stories’—such as stories regarding plastic surgery. Yes, people have a lot of plastic surgery, but those are not the only stories.”

The difference extends to how topics are approached, too. For instance, while the mainstream Korean and foreign news media are rife with stories about North Korean defectors thriving in South Korea, Korea Exposé features an opinion piece by a North Korean defector breaking with the portrayal of South Korea as a paradise compared to the North. It avoids a monolithic or nationalistic depiction of Korea, and is not afraid to be critical of the state or society. At the same time, it presents intimate stories of Korea: One such piece traces the history of a staircase in the small neighborhood of Haebangchon through interviews with locals.

Korea Exposé occupies a strange space. It aims to change Korean society, so it bravely criticizes aspects in need of reform, but a language barrier separates it from the majority of Koreans. Koo explained that while some articles are translated into Korean, the target audience of Korea Exposé is mainly Korean-Americans, Korean diasporas, and foreigners who may be interested in Korea. He is aware that there is little interaction between Korea Exposé and the everyday Korean citizen. It aims to instigate change not by speaking directly to the public, but by its pieces being quoted by, or inspiring, big-name media outlets.

An example is the piece “Gaejeossi Must Die.” Gaejeossi is Korean slang that combines the word ajeossi, meaning middle-aged men, and gae, the word for dog. The article criticizes a certain type of middle-aged Korean man who derives a sense of superiority and entitlement from his age and gender. It not only brought the word gaejeossi to international attention, but also was picked up and translated by a popular Korean online news outlet. Koo said that, after the piece was published, he received an outpouring of support from Korean women who identified with the article’s sentiments and liked the fact that Koo’s position made it difficult for Korean men to dismiss the criticism.

If Korea Exposé looks outward for its audience and influence, Dotface’s strategy is to look inward. The former mainly focuses on bridging the gap between Korea and the world, while the latter brings overlooked domestic narratives to the nation’s attention. Dotface tells its stories through short videos, which are shared on Youtube, Facebook, and its website. The company’s mission is to establish a “new common sense”—the meaning of this phrase becomes clear as one sifts through Dotface’s content. The videos often cover marginalized communities or “taboo” subjects, from gay conversion therapy to living with AIDS to a disabled professor’s protests for greater transportation accessibility. By presenting these issues in the form of personal stories, told by the subjects themselves, Dotface avoids condescending or simplistic narratives. It assigns power back to members of community who are often silenced or rendered invisible.

Whereas Korea Exposé analyzes broader social trends in their local context, Dotface assumes that the audience is aware of the Korean context, and dives right in to feature individuals and perspectives rarely seen in the national mainstream media. In one video, Dotface featured an elementary school teacher who spoke about the need for feminist educators. Screenshots of the teacher’s work desk, covered with stickers of feminist slogan, went viral on social media, resulting in a bombardment of hate comments (before the comments were disabled) and phone calls to the school. “Dotface is in a more difficult position—they’re in the thick of it, they have to face criticism directly, though we are a little more shielded from it,” Koo explained.

More citizens can find their own reflections in these outlets like Dotface and Korea Exposé; they fill the spaces between cultures, in changing mindsets, and outside the infrastructures that cater to the older generation. Citizens are becoming more vocal, entering the political discourse after the bewildering economic growth that had been the main focus in South Korea for so long. South Korea is a country rife with problems beyond just its relation to North Korea, and there are media newcomers committed to highlighting them and bringing about change. As they record the transitions and clashes of modern Korean society, these outlets are capturing the multifaceted narrative that has long been missing from traditional media.

[Photo courtesy of Republic of Korea]