Crime and Corruption Exposed in Panama 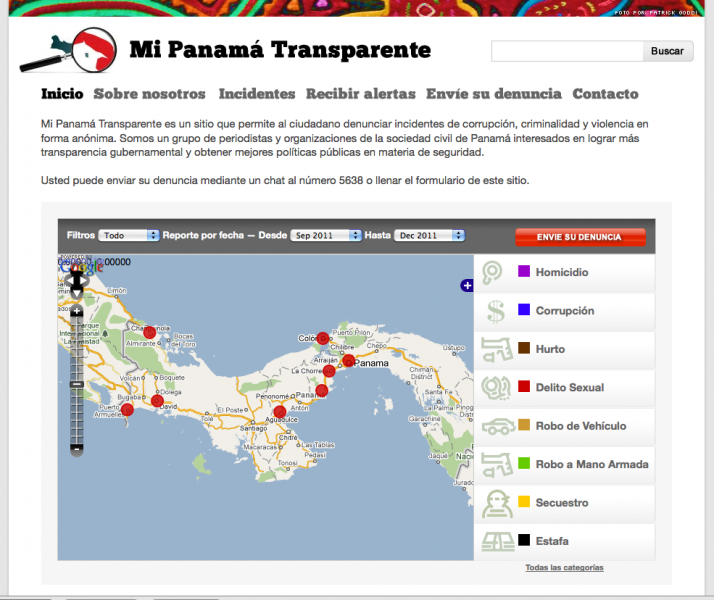 Last February Edilsa Gonzalez, a reporter with La Prensa, one of Panama’s main newspapers, received a tip from Mi Panama Transparente, a website collecting crime and corruption complaints by citizens.

The complaint described in detail the lack of medical supplies, testing kits and poorly equipped ambulances at the hospital in a mining city north of Panama’s capital city:  “We have two gold mines extracting millions of dollars from the mountains of Coclesito and there’s still no evidence of investment in the communities most affected by this activity.” The complaint was signed “Disappointed” (defraudado).

Gonzalez, who covers that town as her beat, took the complaint to the Office of the Public Advocate, the only government entity with authority to investigate the hospital. A month later the daily newspaper Panama America published a story based on the Public Advocate’s findings, “Hospital in Coclesito lacks basic supplies,” alleging the health ministry’s mismanagement of funds as causing the hospital’s conditions.

That story was one of two investigations that have been published in Panama’s main newspapers based on complaints sent to Mi Panama Transparente since the website launched in June of last year. Using interactive software that allows citizens to upload complaints about crime and corruption, Mi Panama Transparente is hoping to become a source for investigative journalists and a destination for citizens searching for a forum to post their grievances.

The idea is that online platforms like Mi Panama Transparente will fill the gap left by the erosion of investigative reporting in newspapers and television stations.  In the process, the website’s organizers say they are implementing new digital tools that allow citizens to participate in investigations in ways that traditional media have not yet tried.

“The site serves as a way for citizens and professional journalists to interact and produce investigative stories of crime and corruption that can improve people’s lives,” says Jorge Luis Sierra, a Mexican journalist directing the project. “With that objective we have spent nine months throughout the country training journalists in social media tools and best practices for doing investigative reporting.” Sierra is spending a year in Panama as a Knight Fellow of the International Center for Journalism (ICFJ) in Washington DC.

La Prensa reporter Edilsa Gonzalez also received training from Mi Panama Transparente, and thinks the website is a useful tool. “It allows citizens who want to remain anonymous for any particular reason to complain about crime or corruption,” she says. “It’s also a good source of information for journalists who are looking for interesting stories.” Gonzalez says that reporters like herself normally don’t have the time to develop in-depth stories, so complaints uploaded to the website that are verifiable and have the poster’s contact information are especially helpful to them.

Mi Panama Transparente is based on the Ushahidi platform, an open source piece of software that allows collection, visualization and mapping of information online. Ushahidi was first used in 2008 to map post-election violence in Kenya. Websites like Mi Panama Transparente are based on crowdsourcing, a term used to describe procedures to elicit contributions of information from the onlinecommunity, or the “crowd.” Crowdsourcing has been used in Chile and Haiti to collect information about earthquake survivors, which was later placed on a map to help first responders locate victims.

Visitors to Mi Panama Transparente send their complaints via an online form or by sending a text message to a special number, 5638. The complaints are then vetted by an in-house reporter before they go on the website. This step helps avoid false posts and protects citizens who might unwittingly include information allowing themselves to be identified, which could be a dangerous situation in complaints about crime or corruption. The complaints are then uploaded to the website and the location goes on a map that allows all online users, journalists, citizens, and authorities to visualize where incidents are occurring.

“The use of maps in storytelling is fundamental. Maps have always been important graphics for newspapers, but their online interactivity gives a far greater understanding of context across geography and time,” says David Sasaki, an independent consultant with the Latin America and Information programs of the Open Society Institute.

Sasaki says Mi Panama Transparente is similar to other civic complaint websites in Ecuador, Mexico, Peru and Brazil, among others, in that crowdsourced complaints are forwarded to relevant authorities. In addition, some complaints end up being covered by traditional media. Examples in other countries include reclamos.cl (complaint) in Chile and QuienPagaManda.com (Money rules) in Costa Rica.

Sasaki says the process of involving readers in the investigations “not only makes sense in terms of resources, but also keeping them engaged.”

Panama enjoys a healthy, free media, and physical attacks against journalists are rare according to Reporters Without Borders. Investigative journalism isn’t one of its strengths, however. Newspapers and television stations have closed investigative units due to the lack of funding, high turnover rate among reporters and lack of training.

“Media in Panama operates freely but not without consequences,” says Luis Manuel Botello, Senior Program Director of Special Projects at International Center for Journalists, the non-profit organization promoting quality journalism worldwide. ICFJ created Mi Panama Transparente as a pilot program to be expanded to other countries in the near future.

“We hope this is the beginning of planting the seed of what investigative journalism can be in Panama and we hope we can start identifying new leaders in the field. Then we’ll see more of these reports in the mainstream media making an impact in society and public policy,” says Botello.

Despite strong economic growth and low unemployment, corruption is widespread in Panama, it ranks 73rd out of 178 countries in Transparency International’s Corruption Perceptions Index for 2010.

Sierra says that since Mi Panama Transparente launched last year, 268 people have sent complaints and the site has received 3,331 unique visitors since June, a relatively low number in a country with a 30 percent Internet penetration rate, which is average for Central America.

He acknowledges that a lot of promotion work remains to be done. Mi Panama Transparente has garnered support from the national media such as newspapers La Estrella, La Prensa, and TVN-2, one of the country’s main television station. Sierra hopes to use those partnerships to get more journalists and citizens to use the website.

At the moment Sierra and two full time reporters at Mi Panama Transparente are working on an investigation about insecurity on pedestrian bridges based on a complaint sent in October of last year. Sierra hopes to publish the results in the upcoming months.

Ingrid Rojas is a Colombian multimedia journalist and a graduate of Columbia's Graduate School of Journalism.