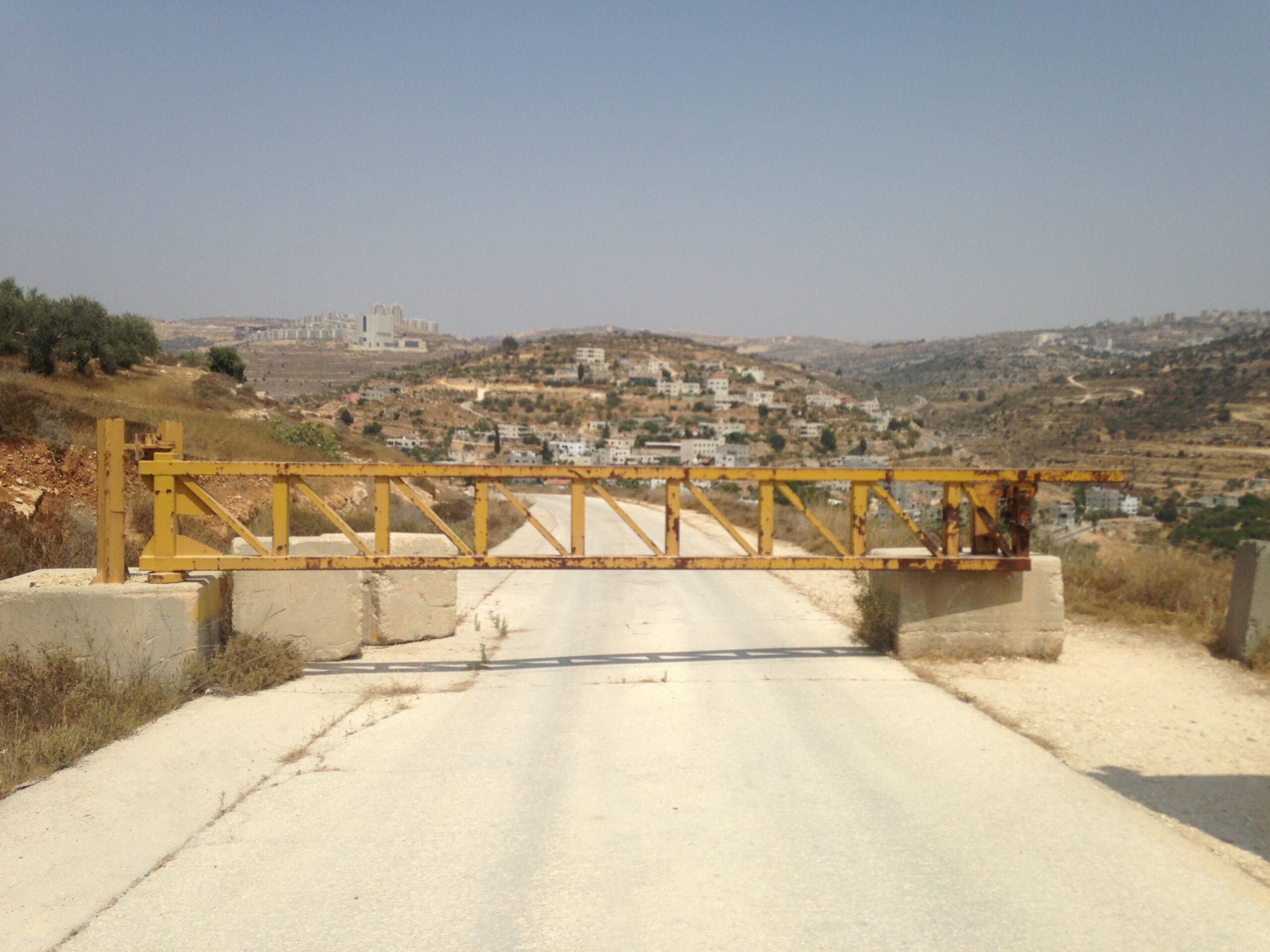 At an informational session in the Israeli settlement of Alfei Menashe in the West Bank, a real estate agent engages in sales patter with house hunters for a new development of penthouses and 3- and 4-bedroom apartments: “breathtaking views,” “the highest standards of construction,” and “just minutes” from major Israeli cities. Two potential home-buyers, Israeli men in their 30s, flip through brochures showing high-rise buildings built on open land that had formed part of the neighboring Palestinian village.

“The view is spectacular,” says the representative of the Israeli developer Zemach Hammerman. “If you look to the east, you’ll see olive trees, and you know what that means. No one is going to block your view.”

Cultivation of olive trees is a hallmark of private ownership by Palestinians, and the Israeli authorities are reluctant to authorize new settlement houses in places where it is difficult or impossible to deny that Palestinians own the land. Residents of the Palestinian village of Azzun have persuaded the Israeli authorities that some of the land next to the housing project is theirs, so settlement houses won’t be built on it for now, but their access to that land has steadily diminished since Alfei Menashe was established in 1983. The settlement has grown to a population of 8,000 Israelis, and a wall designed to protect it and other settlements now encircles an adjacent city of 50,000 Palestinians, leaving just half of the city’s eastern side open for travel. Israeli buyers of apartments in the development are promised an uninterrupted mountain vista, while neighboring Palestinians are denied the permits required to build on their land and, in many cases, prevented from even reaching it.

While the roads are closed to West Bank Palestinians, for Israelis the drive from Israel to Alfei Menashe is seamless, with no checkpoints. Israel’s separation barrier, ostensibly dividing Israel and the West Bank, juts 3 miles into the West Bank to incorporate Alfei Menashe on the “Israeli” side, creating the impression that the settlement is actually part of Israel while cutting off some Palestinians from their land on the other side.

One such Azzun resident affected by the barrier is Mursheid Suleiman, whose land abuts the construction project. The olive trees that the sales representative referred to might be his; Suleiman now limits his farming to low-maintenance crops such as olives because the Israeli-built fence prevents him from regularly visiting his fields. He says his family already lost seven dunams (7/10 hectare or 1.7 acres) in another area, because the Israeli military refused to recognize the family’s ownership and so designated their land for Israeli-only settlement homes.

In keeping with a pattern found in many settlements, an Israeli bank, Bank Leumi, is partnering with the developer to build the project in Alfei Menashe through what are called “accompaniment agreements,” used in Israeli construction projects to protect homebuyers’ investments. Israeli banks often enter into such agreements, which go beyond mere financing and create close partnerships with developers to expand settlements on land unlawfully seized from Palestinians. The banks acquire an ownership interest in the development project, overseeing its construction, releasing homebuyer funds in accordance with building progress, and relinquishing ownership only upon completion.

International law bars an occupying power from using land in the occupied territory except for security purposes or for the benefit of those living under occupation. An occupying country transferring its own civilians into the occupied territory, as in the case of Israeli settlements on Palestinian land, is a war crime under the Fourth Geneva Convention and according to the International Criminal Court. The involvement of banks in these transactions can amount to pillage—that is, seizing private property in conflict situations in violation of the laws of war.

Human Rights Watch requested information and comment from Zemach Hammerman and Bank Leumi about this project but received no response.

Regardless of what political settlement might be reached for the West Bank in the future, businesses have responsibilities under the U.N. Guiding Principles on Business and Human Rights, a widely accepted standard of corporate social responsibility, to avoid contributing to serious abuses of human rights and international humanitarian law. In addition to being illegal under international law, Israeli settlements in the West Bank are sites of human rights violations such as restrictions on Palestinians’ freedom of movement, unlawful seizure of property, violence by settlers (which the army fails to restrain), and discrimination. Unlike Israelis, West Bank Palestinians can’t enter settlements except as laborers bearing special permits, and the Israeli authorities deny them the licenses and building permits they need to operate businesses, while subsidizing and building infrastructure for ventures inside the settlements.

The Israeli authorities bear responsibility for the settlements, but Israeli banks are facilitating their expansion and thus bankrolling these abuses. These banks maintain lucrative relationships with foreign banks and other foreign businesses, enjoy a reputation for good management, and are active on global financial platforms. The banks should adhere to global standards of corporate social responsibility, including the responsibility to avoid contributing to serious violations of human rights and the laws of war.

Palestinian farmer Anwar Abu Khalil, who can only access part of his land with great difficulty due to the separation barrier around the settlement of Alfei Menashe.